Find a Retailer
Perfect for Casting
½” to 1 ½” Thick per Layer
Unique Pre-blend
No Measuring Pigment, Just Mix and Pour
Ideal for Wood Projects
Compatible with Most Finishing Methods and Substrates
Consistent Color Match
Between Layers, and Between Projects

SnowWhite includes fillers and extra-white pigments allowing for a uniform and incredibly vivid white finish. It has been specially formulated to have excellent air release, and a low exothermic heat buildup to allow for easy casting while preventing stress cracking. Compatibility of the cured system with a variety of finishing methods and products ensures that desired custom finishes can be achieved.

What will you create with SnowWhite?

Compared to adding pigments to a clear epoxy, using SnowWhite produces a more opaque and consistent white. It is more cost-effective than buying clear epoxy and white pigments. With the pre-blended formula, the pour to finish time is reduced which leads to increased productivity. Time is money.

SnowWhite includes fillers and extra white pigments which are blended thoroughly, allowing for a uniform and incredibly vivid white finish - between pour, and between projects.
SnowWhite mixes easily and has extremely low order, making it a perfect solution if you are looking for a consistent opaque white color for your next project.

Compatible with Most Finishing Methods

SnowWhite can be easily worked using the same tools you would use when woodworking. It can be sanded, shaped, drilled, tapped, machined, and routered.

SnowWhite is formulated to have a 2:1 resin to hardener mix ratio by volume. Deviation from the mix ratio can result in lower mechanical properties or incomplete cure.

SnowWhite is a thermosetting resin and will generate heat as it cures. Reactivity level is a qualitative indicator of the rate of reaction and temperature of the resin system’s cure. Peak exotherm is the maximum temperature observed during cure. This can be affected by factors such as casting volume and geometry, the temperature of resin and hardener, ambient conditions, and the ability of the mold to release heat

Working time is the time during which the resin has been poured but is not yet gelled. It can still be worked with and will produce a good quality casting. In practice, this means that the resin can still be manipulated and will quickly self level.

Tacky to touch is the period where a second pour can be done without the need to abrade the surface of the first layer for adhesion. During this period, the project will need to be protected from contaminants that can adhere to the surface. To determine tacky to touch, wear gloves and lightly touch the surface of the casting. No resin will stick to the glove’s surface, but tackiness between the glove and surface will be apparent. The onset of tacky to touch has not been reached if the surface significantly deforms in this process.

Set to touch is the point in time immediately after the tacky to touch period, where the surface of the casting is tack-free. Determine if set to touch has been reached using the same method as tacky to touch. There is no observable tackiness between the glove and the surface.

Demolding time is the point in time at which the casting has cured sufficiently such that it can be carefully removed from the mold without causing damage to the epoxy. Castings can be demolded when a wedge can be inserted under one corner of the casting with no observable deformation or bending. Although the casting is solid, it is not fully cured, and it may sag under its own weight. The casting should be supported until it reaches a fully cured state.

Full cure is the point in time when the casting achieves full mechanical properties.

The table below shows Working Time, Tacky to Touch, Set to Touch, Demolding Time and Full Cure for a 72”x 8” casting poured to the maximum recommended depth of 1.5”. Ambient temperature was 22°C, with 23% RH. This casting size (~16L) is meant to represent the typical dimensions of the epoxy portion of a river table project. Processing characteristics will vary depending on factors such as resin volume, casting geometry, ambient conditions, and mold materials.

Store in a cool, dry, well-ventilated location out of direct sunlight. Protect from freezing and physical damage. Do not store in a location subject to frequent temperature changes as the product may crystallize. Use product as soon as possible after opening. If storing remainder of product for another project, keep container tightly closed.

Consult Safety Data Sheet (SDS) before use. Wear protective gloves, clothing and eye/face protection. Use only in well ventilated areas. Avoid contact with the skin and eyes. Take off contaminated clothing and wash before reuse. Keep containers tightly sealed when not in use. Avoid breathing dust, vapors and fumes. Wash hands thoroughly after handling. During post-finishing wear proper PPE and avoid dust. When fully cured, SnowWhite is an inert plastic.

Have another color in mind for your next project?
Try FlowCast® with an added Pigment or Glitter!

SnowWhite will cure more rapidly if left in pail. Have your mold ready, and pour epoxy immediately after mixing. Mold must be sealed thoroughly to avoid blowouts. Epoxy will flow like water, and can escape through even the smallest cracks.

Mix resin and hardener separately for 30 seconds. In a clean, dry container; combine resin with hardener, and mix thoroughly for 4-5 minutes. Mixing ratios are:

Although pigments can be added, the effects will be very limited. For instance, if you were to add black to this rich white the best you’ll get is grey. Additionally, if you were to add in metallics, they will all turn white as the formulation of SnowWhite would overpower the metallics' effects.

Between 15-22 hours providing the previous layer is firm but still tacky to touch. During this time, a second pour can be done without the need to abrade the surface. Additional preparation is required if more than 22 hours have elapsed from the time of mixing. Lightly sand the entire surface with 220 grit sandpaper until glossy finish has been removed. Remove all sanding dust and wipe down the entire surface with isopropyl/denatured alcohol or warm soapy water to remove contaminants. Once tack-free it is necessary to sand between layers to ensure proper adhesion.

With retailers around the world and selling online, find EcoPoxy products where you are. 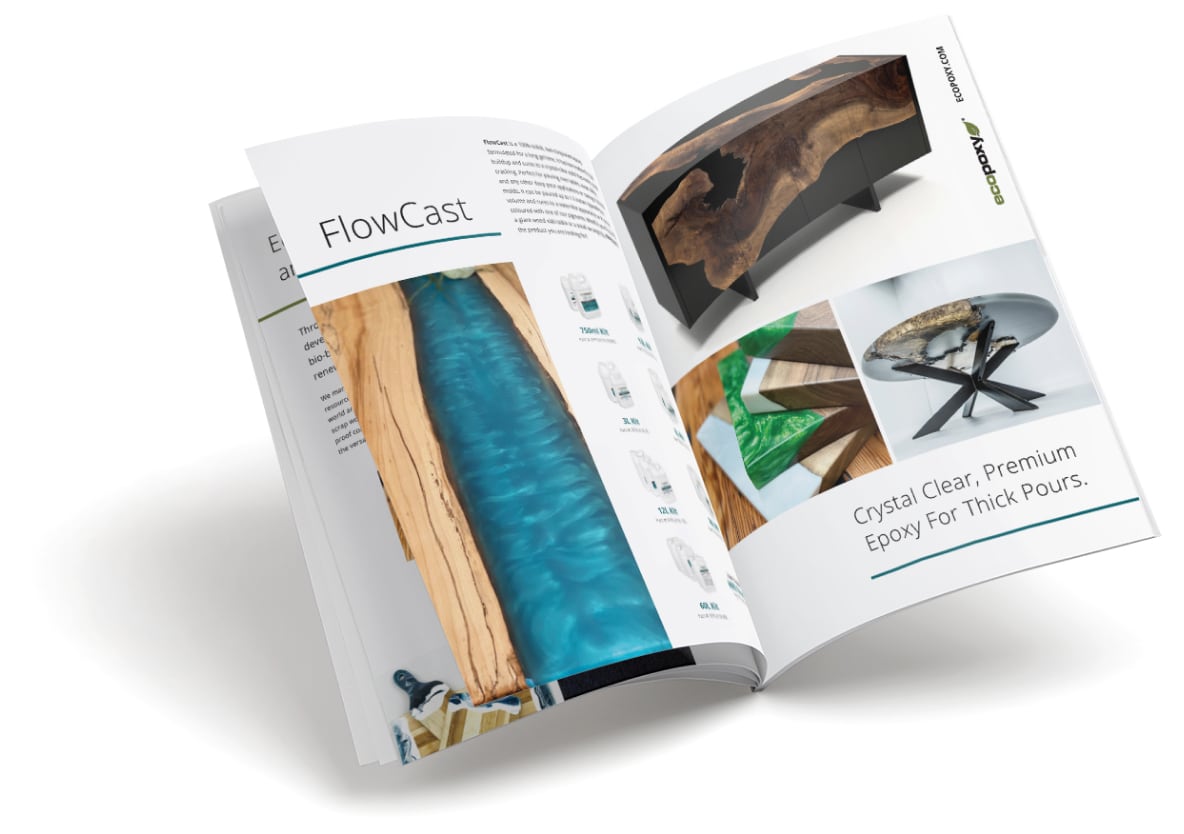